I made my way to the world’s greatest source of reliable information (Instagram) a few weeks ago looking for a vacuum cleaner recommendation. For reasons I still don’t entirely understand, I am now the proud owner of an automatic vacuum. 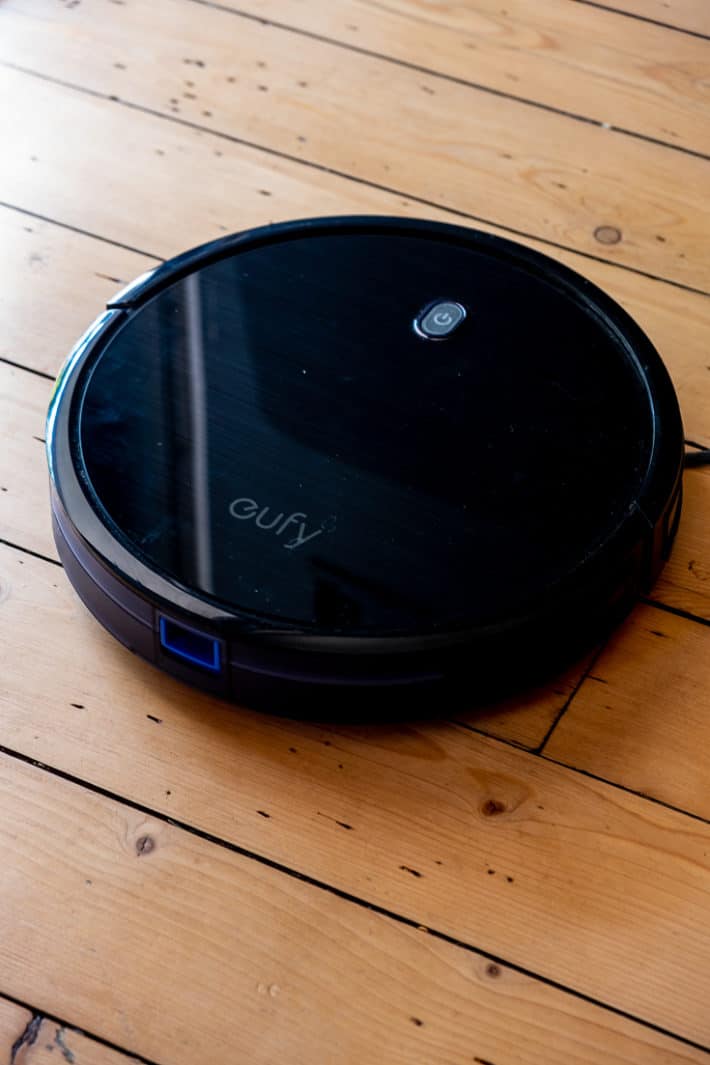 I vacuum my house every day.  Every SINGLE day I vacuum. Do I have OCD? No. Do I have an especially hairy pet, a lot of time on my hands, armpits that spew out breadcrumbs every time I walk?  No.

But what I do have is a robot vacuum. In fact, as I sit in my office writing this post I am vacuuming. Last night while I watched television I was vacuuming. The day before while my family celebrated my mother’s birthday on my front porch I WAS VACUUMING.

At this very moment you could walk with bare feet through my entire house and out the back door without a single thing coming between the sole of your foot and the cool, clean floors. Not even a dried up piece of diced onion. Nothing. As long as you don’t walk in the corners or on the stairs.

I’m going to say that I think you and I are probably very similar. We’re fascinated and excited by new technology and all the things it can do but at the same time – I mean, I don’t care how advanced my iPhone calendar gets, I’m never giving up the pencil scribbled paper calendar hanging inside my kitchen cupboard.

A little about which vacuum I bought and why I bought it.

After listening to the fine people of Instagram who have absolutely no reason to lie to me about robot vacuums, I decided to buy the Eufy 11s.  Which, (and again I think we’re probably similar here) I had never heard of.  I’d heard of the Roomba and that’s about it.

The vacuum is a round disk that’s less than 3″ high which means it can get under most sofas and chairs.

It has a roller on the underside which cleans carpets and two whisk-like things on the sides which rotate and clean bare floors. 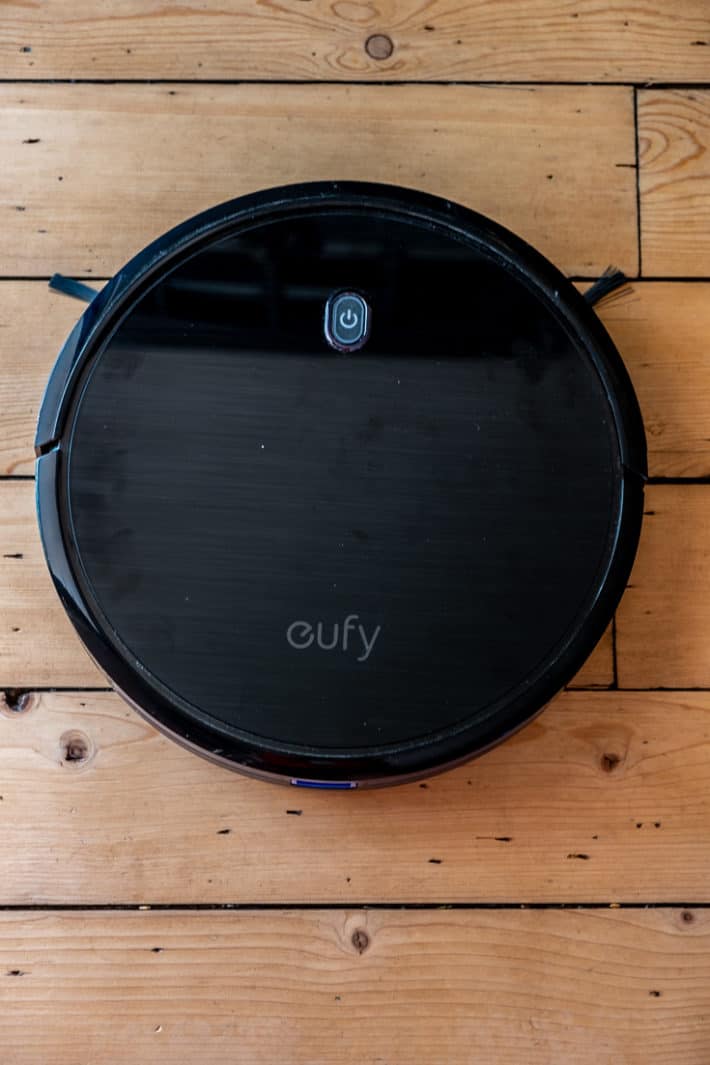 It lives in it’s charging base which needs to be plugged in while it’s not working. After vacuuming it will automatically return to its charging base when it starts to get tired and in need of a sit down (when the battery in it gets low.) 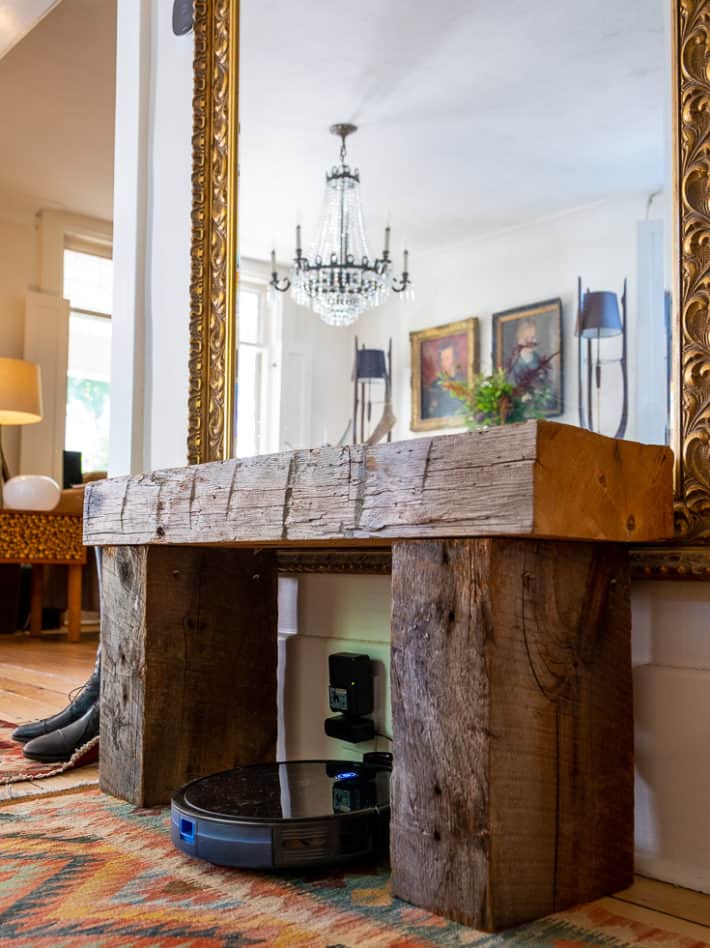 When I first got the Eufy I was ANGRY because in the instructions it said the charging base had to be in an area that had a clear 6′ in front of it and on both sides.  There is NOWHERE in my house that has 6′ of open space all around it!!

I thought screw that, and tried the base in a spot that has 2′ in front of it and about 4″ on either side of it. It works perfectly. No problems.

Also, when you first get a robot vacuum you need to prepare for it.

Stick Vacuum Cleaner Preparing your house for a robot vacuum

In 1996 Electolux released the very first robot vacuum, the Trilobite, which failed dismally with consumers and was discontinued almost immediately.

Zip through the next 6 years when people had to continue to vacuum their floors by hand and we get to the year 2002 when the company iRobot released the Roomba. Even though it wasn’t perfect it was an instant hit among the I’d rather make a mess than clean up a mess  crowd.

The first models used random patterns to vacuum a house by simply bumping into things, ricocheting off them and heading in a new direction. Like Uncle Bob at an open bar wedding.

Newer models use mapping technology through cameras, radar and lasers helping it remember what rooms are like and more efficiently clean them.

Hold on a second, I just heard something smash downstairs and I am 100% certain it’s robot vacuum related … more on this phenomenon later …

Yup. It was the robot vacuum. This is the sort of excitement you can expect when you buy a technologically advanced cleaning system. It’s SO enthusiastic about cleaning that it lets nothing stand in its way. It does not get tired, or bored or intimidated by a speaker wire. It will in fact attack, maim and twist that speaker wire until it chokes on it.

It’s then up to you to help the robot barf it out.

I came to learn that there’s a slew of robot vacuums that have come out since the Roomba made its debut, all of them doing basically the same thing in different ways, at different speeds and with different price points.

These are some of the most widely available and best reviewed robot vacuums.

*if you browse Amazon, you can get this one for hundreds of dollars less by choosing the “Autumn Red” colour instead of “Graphite Grey”.  Also the Miele does not get great reviews from Amazon or Consumer Reports, but those who follow me on Instagram and own one say they love it.

Because my Instagram followers who owned it loved it. This led me to check to see how it fared on Consumer Reports.

The Eufy 11s, the one you’ve probably never heard of, scored the top spot for robot vacuums on Consumer Reports.

The TWO things the Eufy has going against it is that for some reason it has held onto the archaic system of bumping and grinding its way around your house by way of using the archaic “random pattern” system.

It also doesn’t work with wifi, which means you can’t start your vacuum with an app from the comfort of your dentist’s chair or grocery store.

Most other vacuums will work with an app and use sensors to map the room.

Given I had no intention of buying a robot vacuum, didn’t know if I would even like a robot vacuum and really didn’t need a robot vacuum I felt pretty darn comfortable buying one of the least expensive ones available, especially when you factor in the fact that it was rated #1 by Consumer Reports.

And the wide majority of Instagrammers who had robot vacuums LOVED them.

Which got me curious about them. Which led me to ordering one off of Amazon at 1 o’clock in the morning because driving to the store at that time and waiting outside seemed a bit manic.

How do I like my robot vacuum?  I actually love it. There are a few issues with it but the pros outweigh the cons for me.

Stick Vacuum Cleaner What I like about a robot vacuum

Stick Vacuum Cleaner What I don’t like about a robot vacuum.

Like I said, I vacuum with this every day and EVERY day it pulls up an entire bin full or hair, dirt and junk.  To empty your vacuum you need to pull out the little built in drawer it has.  More expensive models have self emptying drawers. The super-cheap Eufy doesn’t have that feature.

You don’t know fear until you’re jolted out of sleep by the sound of someone breaking into your house at 3 in the morning. When you groggily realize your robot vacuum has randomly started cleaning, your fear changes to anger as you’re changing your sheets. 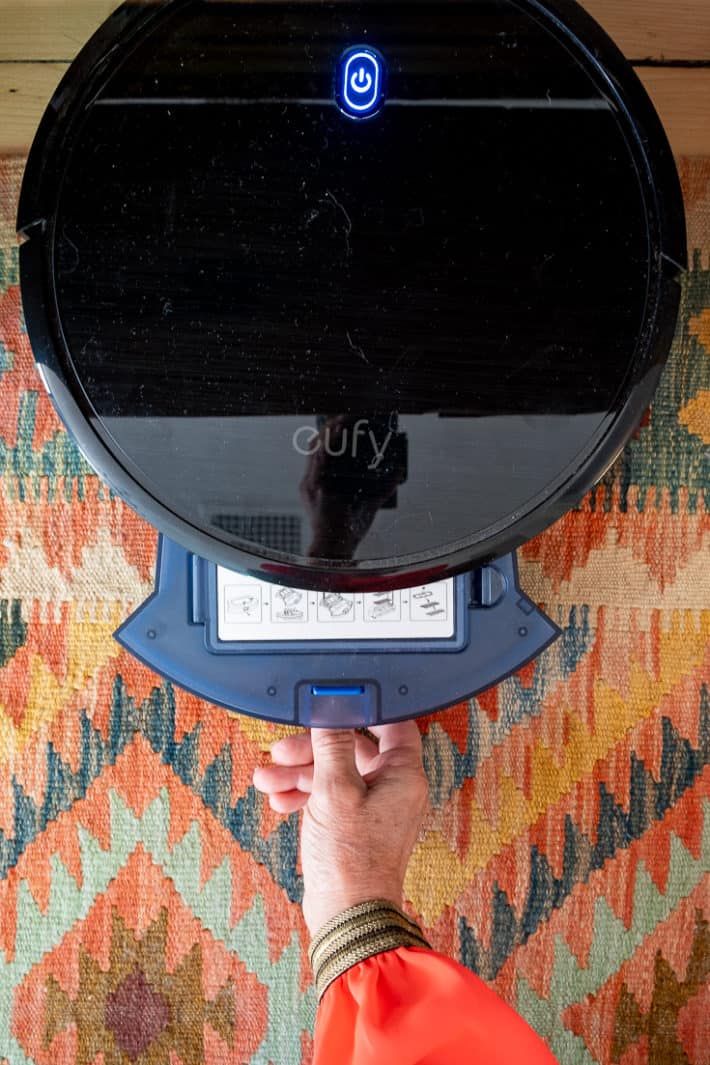 If you’re on the fence about one of these take a look at what my the drawer held after vacuuming for an hour. Keep in mind it has vacuumed almost every single day for a few weeks. 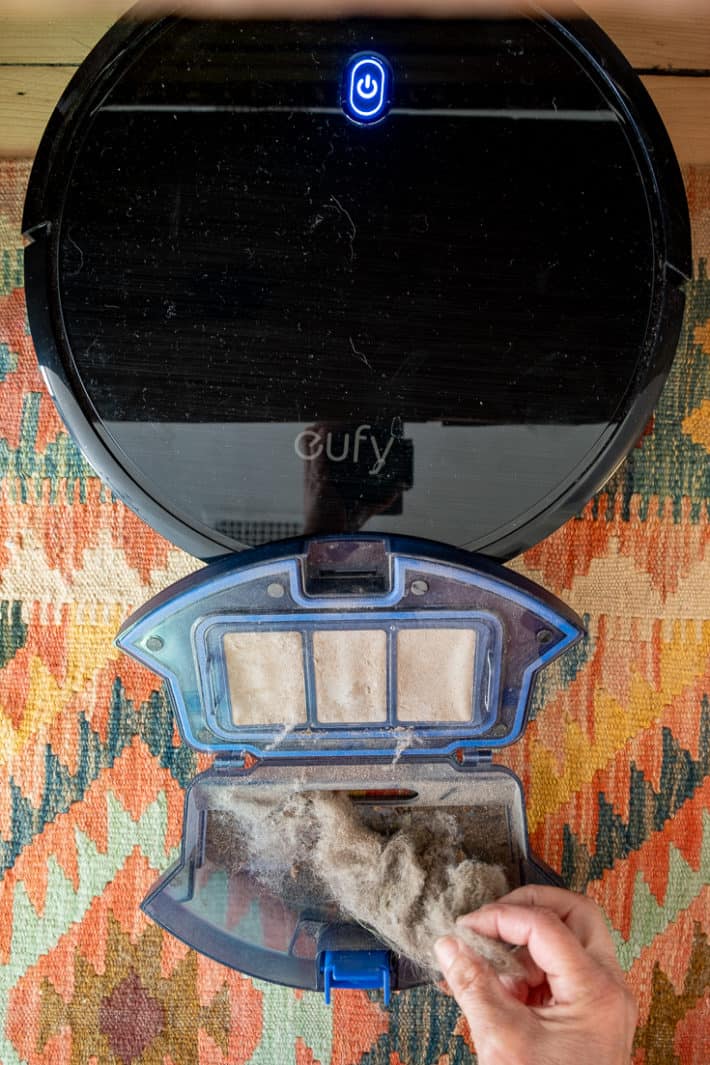 I’m horrified and elated all at the same time.

There are a few ways to use the vacuum (at least this vacuum). It comes with a remote control and there are buttons for “edge cleaning”, “spot cleaning”, “single room cleaning” and more.

You’ll see some of those features in this video on the good and the bad of robot vacuums.

Do I recommend a robot vacuum (this one in particular)? Yes I do.

I’ll still use my central vacuum the odd time, but the majority of the work around here is going to be done on a daily basis by the Eufy which is about 28 more times a month than I would normally get around to vacuuming the whole house.

If you have ANY questions about it leave them here and I’ll answer them honestly for you.

Finally – Betty got a Eufy for her birthday. She didn’t want one, was completely opposed to one and had no intention of getting one.

Until she saw mine.

Subscribe to my newsletter to stay updated with new posts and product reviews.
We use cookies to ensure that we give you the best experience on our website. If you continue to use this site we will assume that you are happy with it.Ok